If I try hard enough, I could probably make an even richer, creamier, and more indulgent dessert than this.  But I would have to try pretty hard.

The bounty of this year’s crop of tart cherries (you know, the ones used for a true, classic cherry pie) left me scrambling to figure out how to use them all.  I still had plenty after making that pie, as well as traditional Greek Vissino Liqueur.  The boys were bugging me to make my peach ice cream, but the peaches weren’t ripe.  But you know, ice cream always sounds good.

With these being tart cherries, I knew they weren’t likely to be a hit in ice cream all on their own.  What do you know, I happened to have a large bag of chocolate chips and a few packages of baking chocolate just lying around needing (yes, needing) to be used.  How fortuitous that chocolate and tart cherries are a perfect flavor match.  Almost like I planned it that way.  Hmmmm….

Speaking of planning, the best ice creams take a little time.  The ingredients get heated to help turn the sugars into syrup and to blend the flavors.  This helps reduce crystallization and gives a super creamy texture.  That means that you need to let it cool down, too, because it’s kind of pointless to turn hot liquids into an icy treat right off the bat.  So, give it time to chill in the fridge.  This is also a recipe that can be done in stages if you don’t have large chunks of time all at once.  Easy peasy. 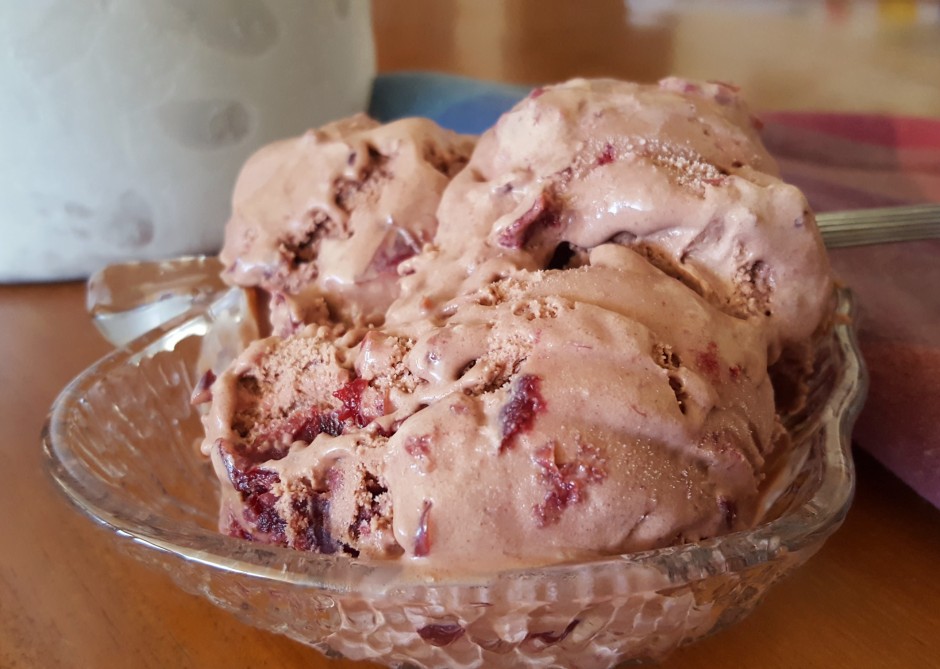 Since ice cream makers vary in capacity, I have written the recipe in such a way that you can increase as needed to get your desired quantity.

For the cherry “jam”:

For the chocolate ice cream base:

The cherries need to be pitted, roughly chopped, and any juices added in to the cherries.  If you are pitting the cherries, it is best to do so over a tray as a lot of juice will come out.  I find it best to set the pitter so that the pit will come out of the stem end of the cherry.  This allows the pit to come out cleanly, then just strain any juice collected through a strainer and add to the chopped cherries.

**The prepped cherries can be set aside in the refrigerator or freezer for later use if time is limited.**

Put the chopped cherries into a pot, add the sugar, and amaretto liqueur.  Heat until the cherries are boiling, turn the heat to medium, and continue to cook the cherries down until they have been reduced to about 2/3 cup volume.  Set the pot aside until cool, then put the cherry mix in a covered container and place in the refrigerator.

**The cherry jam can be set aside in the freezer or refrigerator until later if time is limited.**

Put the cream, milk, and granulated sugar in a pot and heat until the liquid is just beginning to be foamy on the surface, but not boiling.  Turn the heat to low and add the chocolate chips and unsweetened chocolate to the pot.  Continuously whisk the chocolate into the mixture until it is smoothly blended in.  Remove the pot from the heat and add in the cream cheese.  Whisk in the cream cheese until completely mixed in.  You may have specks of cream cheese and chocolate in the liquid, so using a blender may be needed to get the mixture to be completely smooth.  This is optional, but will make for a really smooth texture.  Put the mixture in a covered container in the fridge.

**The chocolate mixture can stay in the refrigerator for a couple of days, but don’t freeze it for later use as the texture will be altered because you will need to defrost it so it can be churned.**

When you are ready to freeze the ice cream, put the chocolate mixture and cherry mixture together in the ice cream maker, and process according to the manufacturers instructions.  This will be a little softer of an ice cream, so if your ice cream maker is supposed to stop when done, this might not, so pay attention to the time recommendations for your particular model.  Many ice cream mixtures will work just fine in popsicle molds and will make a nice, dense ice cream pop.  I haven’t tried this one, but it likely will work just fine.  Enjoy!