Raise your hand if you are a fan of the PBS series “Antiques Roadshow”!  You know, the one that makes you start thinking about dumpster-diving and yard-sale stalking for the chance to find treasure.  Okay, put your hand down now, you look silly with it up while looking at your screen.

We are huge fans of the show in our family.  We turn it into a contest to see who will guess the closest to the appraised value of the object brought in.  We haven’t quite gotten to the point of turning it into a drinking game like the characters on the TV show “Frasier” did on one episode, but it’s still fun none-the-less.

The worst part of each episode, though, is when someone brings something in to be appraised only to find that it is either a reproduction, and therefore not worth much, or when they have something that has some damage and the value is only a fraction of what it could be.  The moment the appraiser utters the phrase “had this been in good condition…”, you know it’s like the kiss of death. 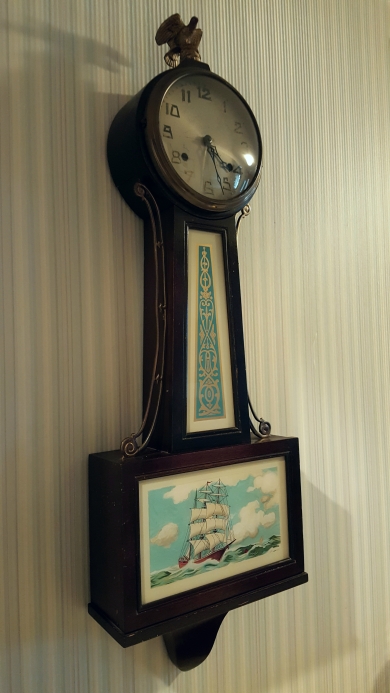 Each time we watch it, we wonder about some of the items in our home that have been passed down to us or that we have purchased, as to whether it would have any value.  One night, I happened to see a clock very similar to one I have that belonged to my great-grandmother.  The appraised value?  $15,000!!!!  I instantly started searching the internet for more information and to see if I could pinpoint exactly what kind I had.

This clock has been in my family for at least 90 years, yet no one remembered much about it.  My great-grandmother had purchased it new at some point in time when she was living in Atascadero.  It made it’s way to my grandparents house after she moved here, where I remember it hanging on the wall by their front door.  At one point my grandfather carefully redrew over the numbers that had faded over time.  It never worked well, and for a while all of it’s inner workings had been removed in an attempt to fix it, leaving the outside as a decorative shell.  Eventually it was all put back together and passed on to my dad, and then to me.

I seldom wind it up for a few reasons.  It runs slow and ends up being significantly off within a day.  It’s supposed to need to be wound once a week, but stops after only a few days.  I also worry about damaging it by using it too often.  It is an antique, after all.

So, what did I find out?  I now have a name of the manufacturer and a time range (1920s-1930s) in which it was produced.  In mass.  Mass produced.  Which means that there are a lot of them and that they aren’t all that rare.  Which means it’s approximate value is… drum roll please… about $80 bucks.  Darn.