It was on a whim one summer evening a few years ago that I decided to do something with some leftover salmon other than just reheating it.  Lo and behold, a new favorite meal was born. 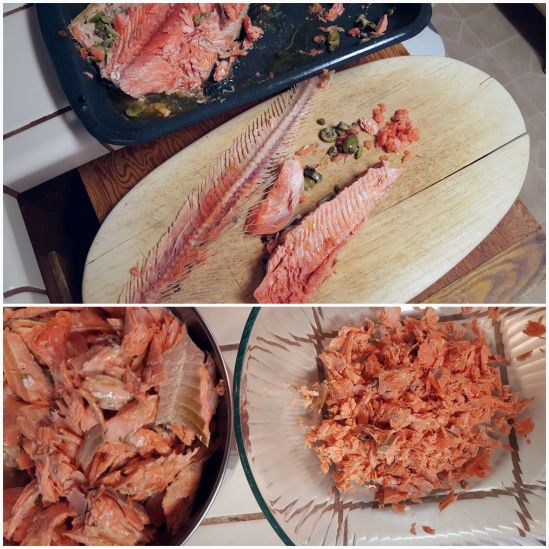 It has become such a standard part of our dinner rotation that when my boys see me cooking salmon (or even trout), they get more excited about the leftovers than they are about the original meal.  These are ψαρο κεφτεδες (PSA-roh kef-TEH-thes), or fish meatballs.  Calling them salmon cakes is okay, too.  No one will mind.

Unlike typical salmon cakes, I make mine with already cooked fish.  This means they come together more easily and quickly, and don’t need as much time in the oil to cook.  They end up being light and tender, not heavy at all.  These can be part of the main meal, or an appetizer with substance.  They can also be frozen and reheated for enjoying later, or serving to guests so you don’t have to be slaving in the kitchen while trying to entertain! 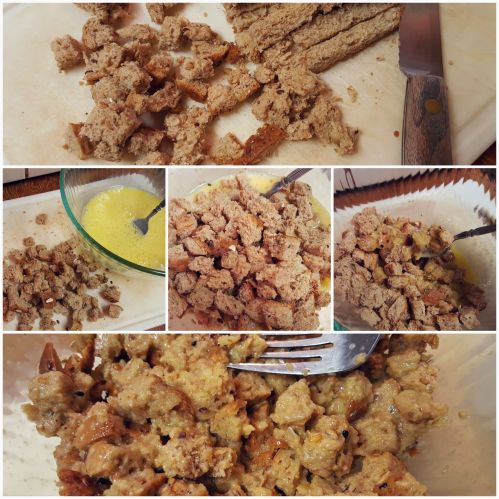 This is also one of those recipes that can be started and stopped in stages if time is an issue.  I have several recipes where I have put those breaks in, so be sure to “shop around” a bit to check them out!

The video below shows the technique I use for frying the salmon keftedes.  Only do a few at a time to avoid overcrowding your pan and to ensure you can move them as needed without getting too crammed for time.

Break the salmon into small pieces.  Add the first five ingredients and thoroughly combine.  Since the fish is cooked, you can sample this mixture to see if you want to add salt or other seasonings.  If the fish was a bit dry, you may want to also add a tablespoon or so of olive oil.  Even though they will be fried in oil, they can still get dry inside.

Scramble the egg and add the diced bread.  Mix together and allow the bread to soak up the egg.  Add this to the salmon mixture.  Use your hands to thoroughly mix all the contents together.  Sprinkle in the flour and mix again.  The mixture should be able to be formed into a ball shape that will hold together.

**At this point, you can refrigerate or freeze the mixture if you want to fry them at a later time.  Just be sure to allow the mix to completely defrost and warm to room temperature first.**

Take about 2 tablespoons of mixture and form it into a ball, then lightly flatten it.  Repeat this process until all the mixture is used.

**You can take your keftedes and lay them out on a tray and either refrigerate or freeze for frying later.  If freezing, line the tray with parchment or wax paper.  Once frozen, they can be stacked and stored in a freezer safe container.  Just be sure to allow them to defrost.**

Have a plate lined with a couple of layers of paper towel ready to place the hot keftedes on to absorb the excess oil.  Put just enough olive oil to almost cover each keftedes in a sauce pot on the stove.  Remember that the oil will expand, and the keftedes will raise the level through displacement.  I prefer this over a shallow pan as it helps greatly reduce the amount of oil splattering and splashing.  Turn the heat to high.  Test a small piece of the mixture in the oil once it is hot, it should be vigorously fizzing/bubbling, if not wait for it to heat a little more.  Once the oil has reached the heat needed, turn the heat down to medium high, and put in the keftedes one at a time.  Don’t crowd the pot as you will need room to turn them.

Allow them to cook for about 20-30 seconds and then carefully turn each one.  Watch the video in the section above to see the technique I use to do this quickly and safely.  (The medium boy was my videographer this time.  Kind of hard to hold a camera and flip salmon cakes in hot oil at the same time!)  I will turn them multiple times to ensure that they cook evenly and don’t get burned on the outside.  Since the fish is already cooked, you won’t need them in the oil for very long, roughly 3 minutes total.  Once they are a dark golden brown and crispy on the outside, carefully and quickly remove them from the oil with a slotted spoon and put them on the paper towel lined plate.  Put the next set of cakes into the oil.  Adjust the heat on the stove throughout the entire time as needed to keep the temperature steady, and add more oil as needed.

At this point you can move the cakes into the oven to keep warm, serve them up to eagerly waiting diners, or set them aside for freezing for later eating.  If freezing, allow them to cool and then freeze them on parchment paper in a single layer on a tray.  Once frozen they can be stacked together in a freezer-safe container.  Defrost and reheat in an oven.  Whenever you eat them, be sure to squeeze some fresh lemon juice over them.  A nice chilled glass of ouzo is a really good complement, too!