This is not a statement from a two year old throwing a temper tantrum.  This is the statement that changed the outcome of World War II.  Ask Winston Churchill.

In the wee hours of the morning of October 28th, 1940, Greece’s prime minister Ioannis Metaxas was awoken to be told that Mussolini had given Greece an ultimatum to allow Axis armies to march through Greece and occupy certain territories.  Metaxas’ answer was in French “Alors, c’est la guerre!” (so this war!).  Basically he said “OXI!” (pronounced OH-hee) which means “no” in English.

This one word changed the course of the war from that point on.  Though Greece eventually fell to the German forces, they lasted longer than any other country that was invaded.  The fact the Mussolini’s forces couldn’t take Greece by itself meant that Hitler had to divert forces to finish the job.  That meant delaying Germany’s entrance into Russia, meaning that they didn’t make it there before winter.  Trying to invade Russia in the winter time is generally bad idea.  Ask Napolean Bonapart. 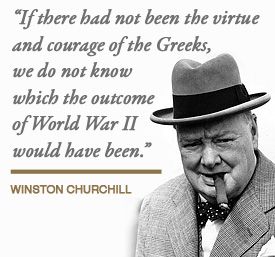 The biggest impact from Greece’s resistance was that it showed that the AXIS powers were not invincible.  Britain realized the importance of Greece’s resistance and strength and provided aid as the small country tried to fight off the AXIS invasions.  In fact Winston Churchill was so impressed by the resiliance and determination of the Greek forces that he is quoted as saying “Hence we will not say that Greeks fight like heroes, but that heroes fight like Greeks”.

So on this day and every day, let us always remember to say a resounding “OXI!” to the forces of fascism and those who are or would be dictators.  Be like the Greeks, the creators of democracy, and fight no matter how small you are.  Unless you’re a kid and it’s your parents telling you to eat your eggplant.  Just eat it.  It’s good for you!