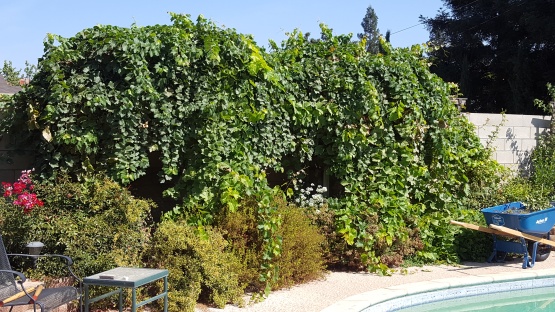 I sooo wanted this one to work.  I was enchanted by the tasty little grapes and was equally excited that they were Greek in origin.  But alas, it turned out to not live up to our expectations.

These grapes have a variety of other monikers, including Champagne grapes (even though they aren’t used for making champagne), black currants (though they aren’t related to actual currants), Zante currants, and Corinthian raisins.  The Zante name apparently is a distorted version of Zakinthos, which is the Greek island most noted for their production.  The currant name is also a distorted version of Corinth, again another Greek origin name.

The vine we planted grew rapidly and aggressively.  This is normal, but we were unaware that this was one of its characteristics.  It would dominate and smother everything in its path.  In the pictures what you can’t really tell is that there are three other grape vines that are being completely covered by the Corinth vine.

Corinth’s aggressive growth was not just a problem for the other vines, but it also caused a lack of air circulation.  Powdery mildew is a type of fungal disease that many grapes are susceptible to, and it thrives in the hot and humid conditions that the Corinth vines created.  And of course, it turns out that Corinth is REALLY susceptible to powdery mildew.  Of course.

The fungus caused a variety of problems, including grapes that didn’t develop or that split during growth, damaged leaves, and most lovely of all, a stench of wet, really dirty dog.  Even though my other grape varieties were less susceptible to the disease, the close proximity (a.k.a. being totally smothered) to the Corinth grape caused them to have some problems, too.

Lesson learned: this grape variety needs its own space!  I think it would be lovely growing on an arbor over a dry space like a concrete pad or dry patch of dirt.  This would give it ample room to grow, and the air circulation needed to help keep powdery mildew at bay.  No guarantees, though.  If you get it to grow for you, you will be rewarded with loads of tasty little grapes that could then be dried into Zante currants.  Unfortunately, don’t count on the leaves for things like Dolmades (stuffed grape leaves), as the leaves are too tough for use.