I’m not going to lie, I hated this when I was a kid.  I used to call it moose-skata.  My mother was not pleased with this nickname.  I’ll explain in a moment. 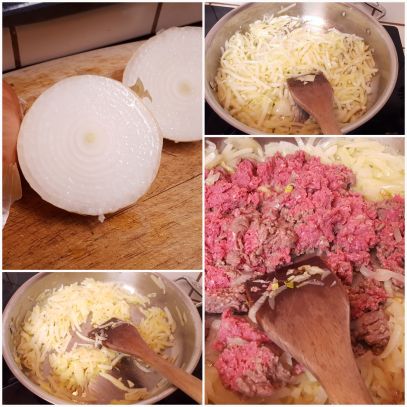 I now really like moussaka (pronounced moo-sah-KAH) and only jokingly call it moose-skata.  Skata (skah-TAH) is the Greek word for what comes out your back-side, and the not nice word for it, too.  Hence the reason my mom still isn’t pleased with the name. 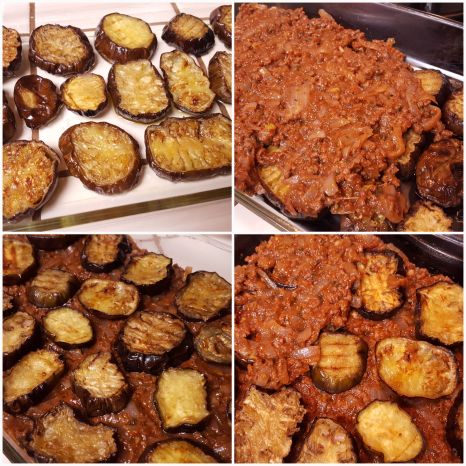 Traditionally, the eggplant used for making moussaka is heavily salted to allow for moisture and any bitter flavor to be drawn out.  I’ve even seen instructions for squeezing the eggplant.  The reality is that this process really doesn’t draw out much moisture and you’re left with smooshed eggplant.  Often, the eggplant is then fried before being put into the rest of the casserole.  This is all rather time consuming and in the end doesn’t really help much.

Instead, I like to cut my eggplant slices a little thinner and then grill or broil it.  This gives a nice roasted flavor, and helps to dry out the eggplant so your casserole won’t be too watery.  The texture of the eggplant is much better, as well, being almost creamy.  It also takes a lot less time, which means you can enjoy this classic Greek dish more often! 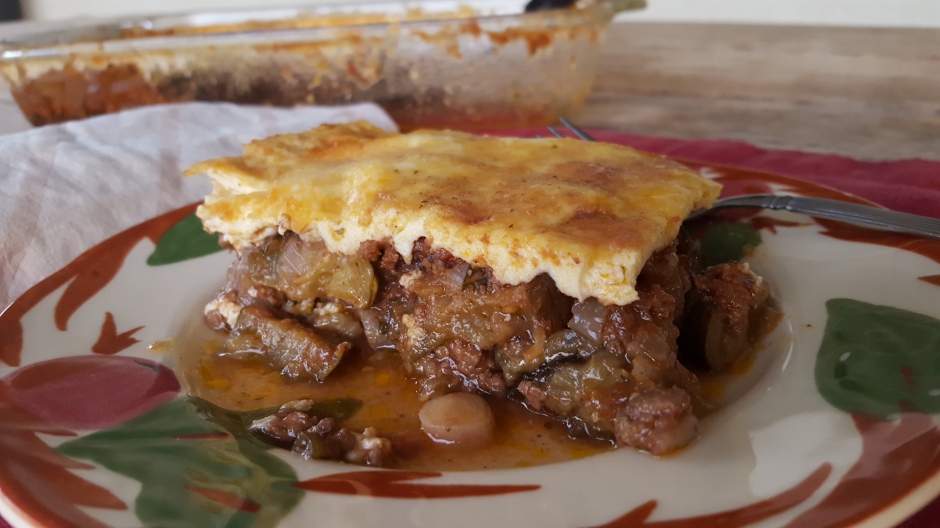 For the meat filling:

For the Bechamel sauce:

I misjudged how much sauce I needed for the size of pan that I had, and would have liked a thicker layer on top.  However, the thickness is up to your preference.  The amounts below will lead to a slightly thicker topping than what is shown in the images above.  Adjust as desired.

Pour some olive oil into a flat dish, put each eggplant slice in and turn over to allow oil to briefly soak in on each side.  Set each slice onto a grilling rack or broiling rack and generously sprinkle with salt on each side.  Grill or broil the eggplant until cooked through (it should be soft enough to easily pierce with a fork) and dark golden brown on each side.  If broiling, place the rack a few inches away from the broiler so that it doesn’t burn.  Set the eggplant aside until ready to use.  You can put the slices on paper towels to soak up more moisture if you want, but it is not necessary.

Put 2-3 Tbsp. olive oil in a wide pan and add the sliced onions.  Saute on medium heat until they are golden in color and soft.  Add the garlic and saute for a couple more minutes before adding the ground beef.  Cook the meat in the onions until nearly cooked through.  Puree the diced tomatoes and add them to the meat and mix in.  Add the wine, cinnamon, parsley and continue to cook the mixture until very thick.  You should be able pull a spatula through it across the bottom of the pan and leave a trail that stays open.  Add in salt and pepper as desired.

Lightly oil a 9 x 13 oven proof casserole dish.  Put half of your eggplant slices equally spaced, then spoon half of the meat mixture over them.  Be sure to push the mixture down around the eggplant.  Repeat with another layer of eggplant then meat mixture.

Preheat the oven to 350 F.  In a sauce pot, melt the butter on medium heat, then add in flour.  Whisk the flour in and cook until the mixture is bubbling, but don’t let the flour brown.  Add one cup of the milk in slowly while whisking continuously.  One hand pours, the other whisks.  Once the milk is completely blended in, slowly add in the rest of the milk while whisking to make sure it is smooth.  Add the nutmeg and continue to cook until the sauce is thickened.  It should be able to cover a spoon thickly.  Add salt as desired, but keep in mind you will be adding Parmesan which is salty.

Remove the sauce from the heat and allow to cool for a few minutes.  While it is cooling, separate your eggs and beat the yolks.  Slowly add the yolks to the sauce and whisk them in completely.

Pour the Bechamel evenly over the top of your meat mixture.  Sprinkle a thin layer of Parmesan cheese over the top.  Bake in the oven for about 45 minutes, or until bubbling throughout.  Allow the moussaka to cool a little before serving to allow the filling to firm up a little.  Enjoy!