Who picked a peck of pickled peppers?  I did!  Except I honestly don’t know how much a peck is.  I think it might be a lot. 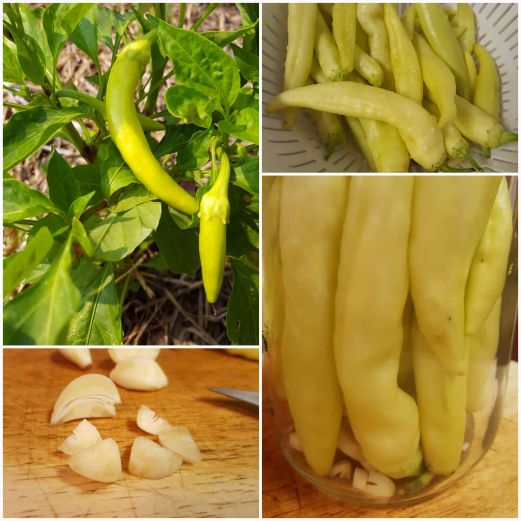 Certain types of pepper plants can be rather prolific when producing their fruits.  Banana peppers are one of them.  I have had quite a glut of these tasty treats, and have been trying to find a multitude of ways to enjoy them, from salads to appetizers, to just about anything I can come up with.

A lot have gone into the freezer for later use in spaghetti sauce and baked vegetables, but I decided to experiment with pickling some in a way similar to how Greek pepperoncini are done.  I use the pepperoncini in a baked chicken dish and sometimes throw them into my tuna salad.  So I figured these would be a good alternative to have.  And they are!

These have a good tart bite from the vinegar while still maintaining a distinct pepper flavor.  Garlic adds a little extra zing and gives a nice visual touch to your jars if you want to use these as gifts, assuming you feel like sharing!

The amount of the ingredients you need will depend on how many peppers you have.  The brine is easy enough to make so it won’t be a hassle to make more as needed.  Any extra can be stored in the freezer or refrigerator almost indefinitely until the next batch.  The brine won’t freeze solid, by the way.

For each quart jar:

Be sure to prepare all jars and lids by properly sterilizing them in a hot water bath or in the heated wash and dry cycle of your dishwasher.  If you are new to canning please read my post on canning basics before beginning.  You will also need to prepare a hot water bath for the jars after they are filled.  Use a water-canner or a deep pot that is at least 4 inches taller that your jars.  Fill the pot with water deep enough to cover the filled jars with an inch of water and set it to boil while you prepare your produce.  Remember that the filled jars will displace some of the water, so the water level will actually be lower at first!  Have something ready to safely scoop out boiling water if you realize later that you put too much.

Put the garlic chunks into your jars.  Rinse peppers thoroughly and leave whole.  Put them into the jars, alternating some with the stem pointing up with some pointing down.  You want to pack them in as tightly as you can without crushing them.  Add the calcium chloride to each jar.  Though this is an optional ingredient, it is well worth using.  It is a naturally occurring salt that helps to keep your vegetables crisp through the canning process.  You will likely find it in home goods or hardware stores that sell canning equipment and supplies and it will usually be marketed for making pickles.  It’s not expensive, and you don’t need much at a time.

Prepare your brine by placing all the ingredients in a pot on the stove and heating to a boil.  Remove from the heat, and carefully pour into the jars with the peppers.  Fill to 1/4 inch of the top of the jar.  Use a flat spatula or butter knife to squeeze out any air bubbles trapped between the peppers and add more liquid as needed.

Put caps and rings on the jars and put them into the boiling water of your canning pot.  Process your jars for 10 minutes, then remove from the boiling water.  Allow the jars to cool to room temperature, remove the rings and check that the flat lid has sealed by gently pulling on it.  If it is sealed properly, you can replace the ring and store your peppers in a cool dark place.  If not, place the jar into the refrigerator to be stored.  Allow your peppers to sit for at least 3-4 weeks to allow the pickling process to occur (I know, this requires patience).

My garden is starting to get the message that today is the first day of Autumn here, though sadly the weather hasn't quite caught on, yet. It's still hot and the air is smoke filled from the KNP fire nearby. But each day starts off a little cooler than before, signaling that the transition is still taking place. I'm hoping to get going soon on my cool weather crops like broccoli, cabbage, lettuces, and other veggies that just aren't willing to put up with our hot summers, but do well enough in the fall and early spring here. There's a lot of maintenance work needing to be tackled that the lower temperatures finally allow us to get to, as well. So for a gardener like myself in zone 9a, Autumn is really a great time of year! Happy Autumnal Equinox to you all, and for those of you south of the equator a Happy Vernal Equinox instead!
GOODBYE SUMMER!! And don't come back anytime soon! We're still hitting the upper 90s here for a while, but keep your fingers crossed 🤞 that we don't go back into the triple digits again till next year. Summer is not my favorite season, I'm much more of an Autumn gal myself. Good thing it officially starts tomorrow. 😁 I hope your last day of summer has treated you well. For those of you south of the equator, happy Spring! (Pic is of one of my Lantana plants that are all blooming with a vengeance right now.)
I had some eggplant languishing in the refrigerator begging me to make something of it before it gave up its soul to the compost pile. I won't divulge the amount of other veggies that didn't make it in time 😥. This has been the most exhausting school year, yet (which is saying something since this is year 27 of teaching for me), so I've been grabbing the frozen vegetables a lot lately. But the eggplant started yelling at me rather loudly, reminding me of how much I love this dish. This is my version of Imam Bayaldi, a dish from Asia Minor made of eggplant, tomatoes, onions, and fresh parsley all roasted together and topped with a light layer of feta cheese. The name translates to "the Imam (cleric) fainted", because of how good this tastes. It isn't difficult to make, either, and so worth it! The recipe is waiting, so come on over for a visit, and if you do faint at the taste of this I'll make sure you land somewhere soft!😊
Are you team pie or team cake? I'm an unabashed cake snob (most don't do much for me), so more often than not I'm going to choose pie over cake. But I'm also a bit of a pie snob, too. Yes, I'm picky, I know. Fruit pies are my favorite type and when fall is starting to come about, it's got to be apple pie all the way. I'm no fan of a goopy gooey pie, I want real honest-to-goodness fruit flavor and texture. This apple pie hits the spot perfectly for me, and I think it will do the same for you, too! The recipe for both the pie filling and the perfect flaky crust is waiting for you, so come on over for a visit!
Summer is winding down, and as far as I'm concerned, it can't happen fast enough. The downside is that all those delightful fruits that are symbolic of summer start to fade away with the heat. Stone fruits like plums, peaches, and nectarines are going to be harder to come by, so now is the time to get your fill of their delicious sweetness before they are gone for the season. This oven baked pancake sits on top of a layer of those fruits that then become caramelized and slowly release their juicy goodness. It's makes a wonderful, and surprisingly easy, breakfast/brunch that is just sweet enough without being overwhelming. So come on over for a visit to get the recipe, and let's bid goodbye to summer together. 😊
Put down the pumpkin spice whatever-it-is that you have in your hand right now. Patience. You have all of October and November to indulge. September is for apples and it's only fair to let them have their time to shine. As delicious as a good old fashioned apple pie is, this traditional Greek cake is even better, in my not so humble opinion. This cake is milopita, and it is absolutely stuffed with fresh apples and a whole lot of flavor. I know we tend to think of cake as a dessert only thing, but this lovely treat is usually eaten for breakfast! I'm quite okay with this 😁😁!! The recipe is ready and waiting for you, so come on over for a visit and let's enjoy the season while it lasts!
#neverforget
Here's to a beautiful weekend!